Eating at the Track 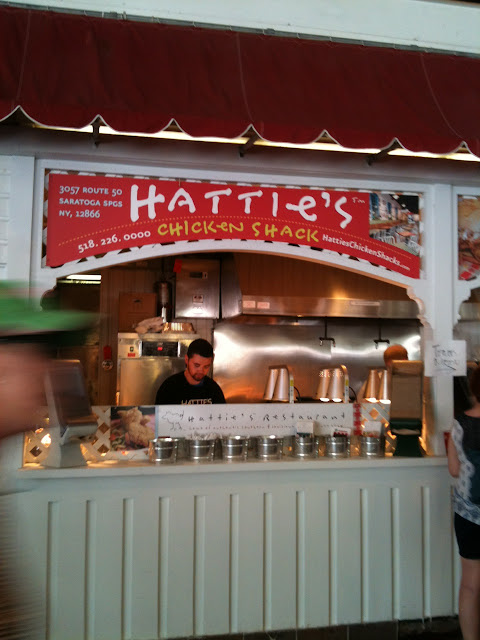 It happened.  The track opened!  We went opening weekend with our friends from out of town (first-timers to the CapReg, and one of them had never been to a racetrack before).  You know you're in Smallbany (or the Smallbany area, at least) when you basically know a handful of people outside of work and manage to see 3 people you know at the Track opening weekend.  There were tons of people there, but almost immediately we saw a dude from work and two folks from the dog park.  Obviously we don't know their names--they are [dog's] mom and dad.

So, eating at the track has a lot of choices, but I'm still getting started.  See above - HATTIE'S!  While brunch there recently was a bit of a miss (chicken was a little off, eggs weren't cooked right the first time), you really can't go wrong with fried chicken.  They had some initial drama on the Facebook page and beyond about their new location, made a few threats not to be at the Track, but alas are still there.  And BTW it was very easy to find. 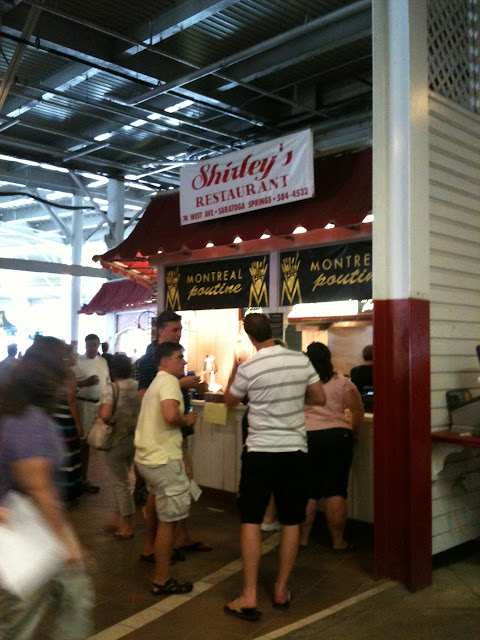 The line for Hattie's was long and we'd been there before, of course, so we had some smoked meat poutine (with gravy and curds of course) from this joint. When Shirley's was sold to a Montrealian (Montrealite?), poutine hit the menu faster than you can say s'il vous plait. 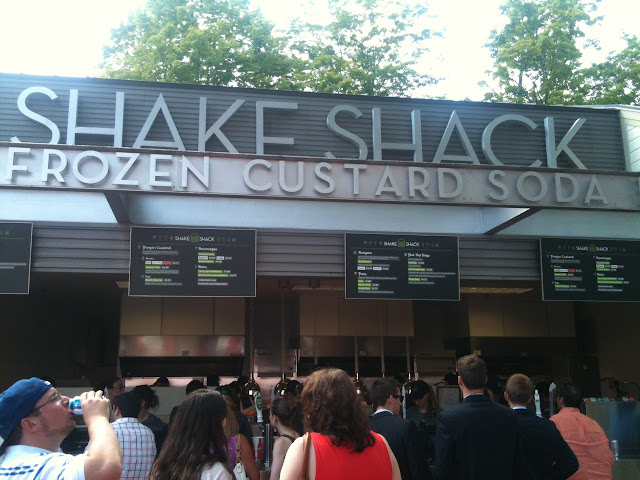 Shake Shack.  Whether you're a burger and fries person or a straight up milkshake person (raises hand), you are covered.  The line moves fairly quickly.  The straws aren't extra big, which is a little sad for someone who likes to drink milkshakes as fast as possible.  The Sloppy Track shake sounds up my alley but really the black & white is my favorite.  I'm a fan of salted caramel (including the Starbucks salted caramel hot chocolate...swoon) but it was too salty, and mine was on the meltier side.  I like my shakes frrrreezing and hard to drink, preferably out of an extra wide straw.  Thanks.

For now, these are my only eating experiences at the track after exactly 2 visits and 2 summers as a local.  I have a feeling we'll be back a few more times this season and maybe I'll branch out.  To homemade picnic sandwiches that I brought with me...(PS that's a thing, you can do that.  We brought a small soft cooler with beer in it. CHEAP! YUM! CLASSY!)

Go, have fun, eat food (bought or brought), and don't lose all your money.  I ended up $2 up after 5 races, but with admission at $3 and my shake at $6, I guess I was really down $7.  Pretty reasonable for 3 hours of entertainment and the chance of the thrill of winning.
Posted by Capitol to Capital at 12:00 PM