So with Rosh Hashanah being next week and all (yes, next week), this post cropped up from The Shiksa: How To Braid Challah.  I marveled at her many methods to make a round challah, particularly the fill-a-square (with raisins, etc), roll it, and snail it version.  Which made me want to share with you how I braid round challah for Rosh Hashanah.  Everybody has a different recipe, rolls it out in their own special way, and the braiding comes in quite a few forms with different numbers of strands.  It's very personal.  Although I do a six-strand like this lady, I'm practically morally opposed to her method of rolling out the strands, tapering the ends (just rip off any weird/uneven ends, or tuck the ugly edge under!), pinching so gently that it doesn't actually do anything, etc.  Too complicated!

Now I bring you: round challah via the tic-tac-toe method, in my very ill-lit kitchen that has zero natural light.  These instructions were taught to me by a lovely, smart young lady, a family friend we've probably known since she was just a little ball of challah dough.

Start with four even(ish) strands.  I yank (small) fist-sized balls of challah out of the bowl onto a floured surface (not too flour-y unless it's very sticky--in which case, add flour) and apply pressure with both hands, rolling back and forth until I have a nice, smooth, even strand of dough.

Arrange two of them side by side.  Take a third and position it perpendicular, over one strand and under the other. 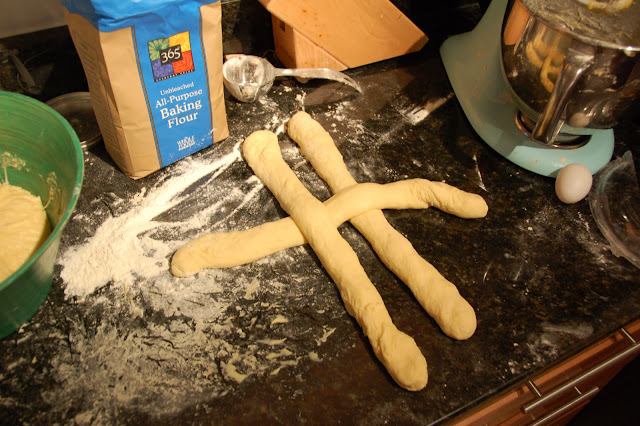 Take the fourth strand and position that one perpendicular to your original 2, weaving under/over opposite to Strand 3 from before (remember?  Right above here?).  Maybe inch them together closer like you are a little basketweaver. 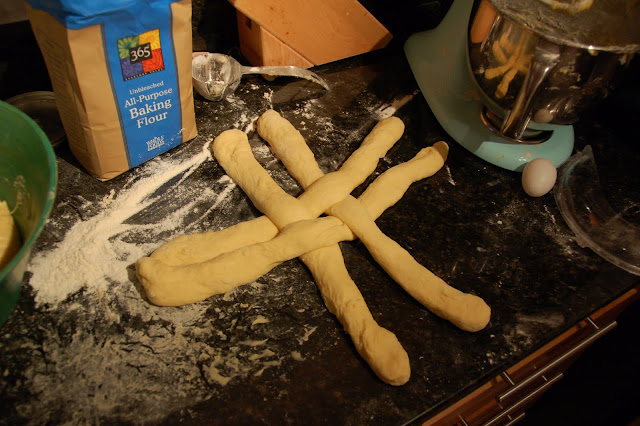 OK, this is where it gets interesting.  You have 8 "legs" sticking out, some are "overs" and some are "unders."  Each of the four sides has one Under and one Over. Here, I took an Under (start wherever) and moved it to the right, over and Over, which is it's neighbor.   I feel like I'm explaining this badly.  Are you with me? 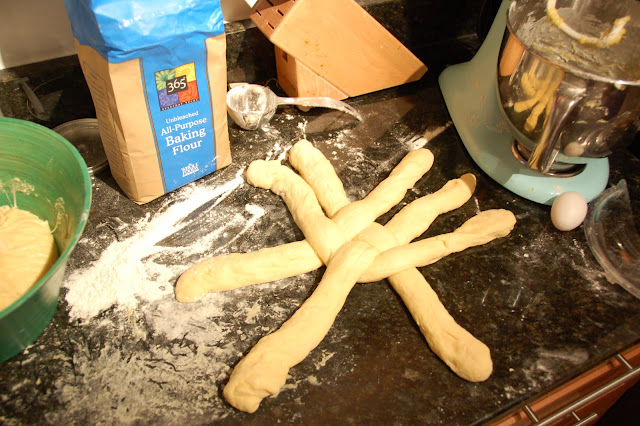 Repeat three more times counter-clockwise (in this case it's counterclockwise because of the way I set up my tic-tac-toe, yours may not be--doesn't matter!).  Pick up the next Under (which will be right next to the strand you just put down, see above) and move it over to the right, on top of the Over next to it.  It'll look like this now: 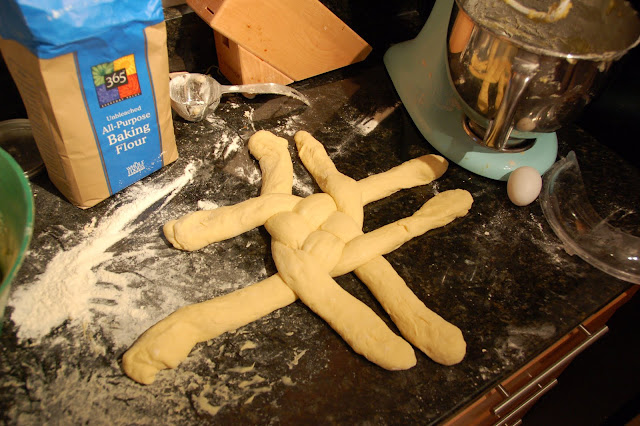 So what now?  After you've got the above, you need to turn the boat around, and start going clockwise.  You can start anywhere, but it's the same idea--take that strand that's crossed Under and move it to the left, laying it on top of the Over strand.  Repeat another 3x. 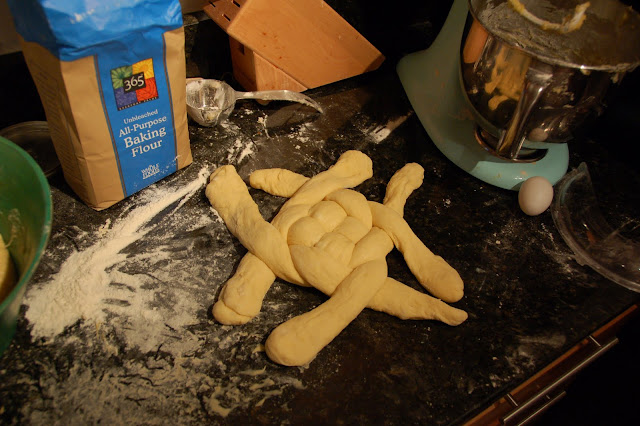 Then turn the boat around AGAIN and go counter-clockwise.  Go go go!  When you run out of strands, feel free to tuck strange strand-ends under, even ripping off the too-much extra for another loaf or a small knot roll.

I also like to add cinnamon and sugar after an egg wash for some sweetness for a sweet new year.  J isn't a raisin fan, but if he were, I'd probably add some golden ones during the kneading process. 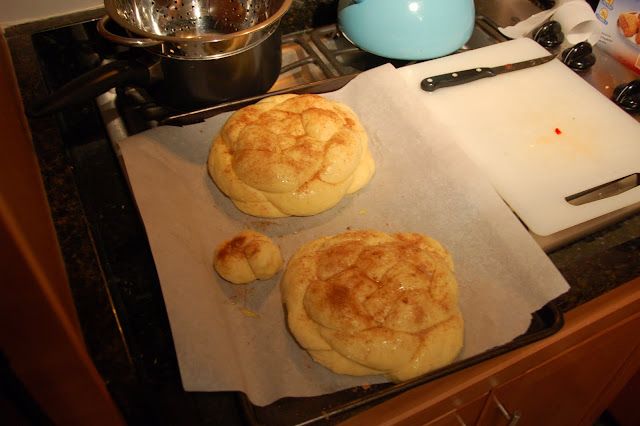 Bake.  Place it on a parchment-lined baking sheet and pop in the oven at 325 or 350 (I forget and have done each) until it's getting golden on top and it sounds hollow when you tap the bottom.  Sometimes the top browns better than other times--it's a work in progress, and it's not perfect.  But it's mine. 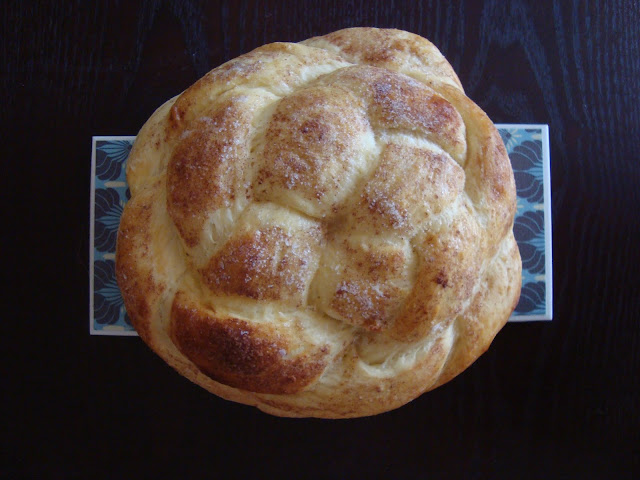 [I put them in the freezer to stay fresh for next week before taking the picture, then yanked it out and displayed it on my lovely birthday coasters for you all.  Hence a few frozey flakes mixed in with the cinnamon and sugar.  Below, some challahs of my past.] 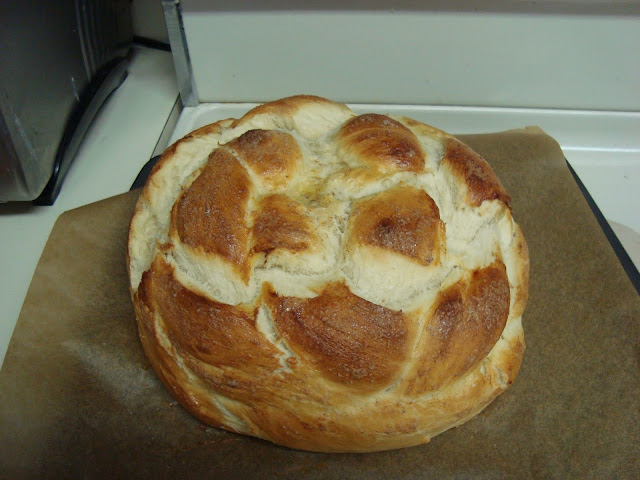 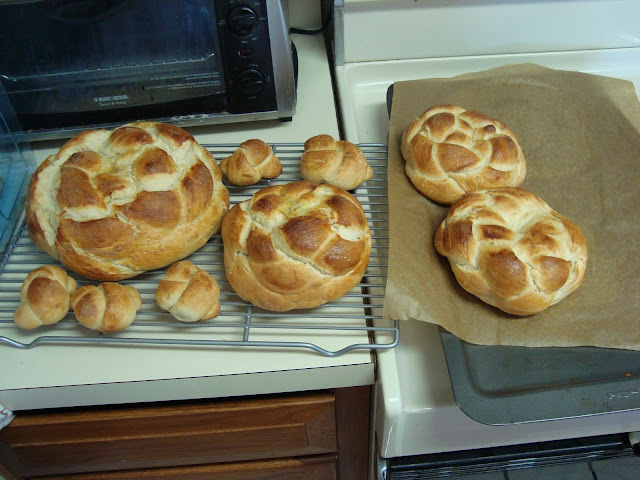 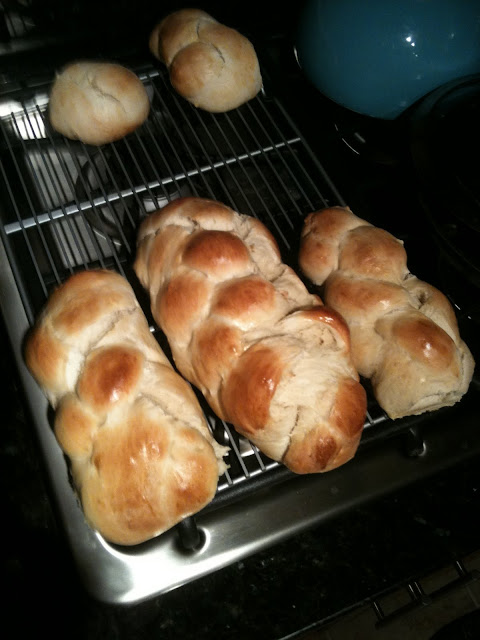